If you’re ready to be the CEO of your business and stop doing the boring tasks, you know that stuff that doesn’t light you up, you should embrace automation.

You’re probably thinking ‘Oh great, something else I need to learn.  No thanks I don’t have time and I’m spinning enough plates already”

If you’re already so stressed that you have a mild panic attack and immediately go into overwhelm when a client demands more of your time, you need automation in your life.

Here’s 5 reasons why every business needs an automation strategy:

There will be less errors

Let’s face it no one’s perfect. We all make mistakes, it’s inevitable.  Depending on what you do that little mistake could be catastrophic to your business.  That’s where automation comes into its own.  The mistakes that humans make are usually while doing the repetitive tasks, tasks that are perfect for automation.

Unlike humans, computers do not make mistakes.  A computer keeps doing the same thing until you tell it to stop.  Those repetitive tasks are perfect for automation.  Think how many of those tasks you could get your computer to do for you.

If you have a vision to grow your business you need the right foundations in place.  It’s no good trying to spin all the plates and expect to scale.  Let’s face it, it’s just not going to happen.

When you review your processes, simplify and streamline with automation, all of a sudden scaling becomes so much easier than you thought it would be.

Get the right systems in early, and not only will they scale with your business it’s also cheaper and less complicated than hiring staff or outsourcing.

You probably think automation is expensive.  Sure, there is an initial cost for bespoke automated solutions, that is higher than hiring someone.  BUT, you need to think of automation as an investment that pays for itself over and over again.

Always look to automate before outsourcing.  You could be paying someone over and over to do the same repetitive task whereas you pay for the initial set up with automation and then it keeps on running until you tell it to stop. Think about how much money you’ll save.

So I’m sure you’ll agree that machines are more reliable than humans.  They never get sick, leave or forget to do something.  You get the same consistent results that will keep your clients satisfied.  Your clients will have confidence in knowing that you deliver the same results time after time and it’s automation that helps you achieve that.

Believe it or not when you use automation in your business you’ll be doing way less BUT your productivity will increase.  You’re probably thinking “that’s impossible”, but it’s true.

Your business will be running 24/7 365 days a year.  It will be working while you’re sleeping. Imagine waking up to a notification that you made money while you were sleeping.  That’s what happens to us when we sell an eBook.  We wake up to a message saying “while you were sleeping you made £25”  It might only be £25 but let me tell you it’s an amazing feeling waking up to a notification like that and it’s possible when you automate your business.

When you’re ready to work less than you ever thought possible, increase your earning potential AND be able to shut your computer down early every day so you can spend the rest of the day hanging out with your family then automation is what you need.

Just think what you could do with all that extra time.  Makes you think, doesn’t it?

If you’re ready to embrace the magic of automation and get back to your CEO role contact us here.

What on earth is Prompt Engineering ?

What on earth is Prompt Engineering ? read more

Will AI take our jobs ?

How to pivot and sell automation services

How to pivot and sell automation services read more

How we helped improve Safety Rocks closure rates with Airtable 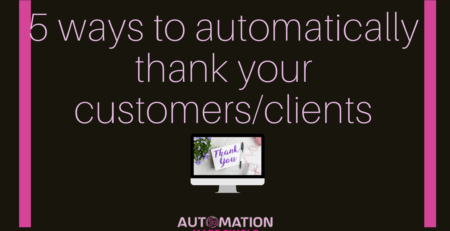 5 Ways to automatically thank your customers and clients

We're big fans of thanking our customers and clients. It's a simple... read more

6 ways to transform your CRM with automation

Our response to the 7 common workflow automation myths

Workflow Automation—the word that sends chills through the spines of many business... read more

4 ways a tradesman can save time with automation

For too long tradespeople – plumbers, electricians, mechanics, and handymen – have... read more

6 Ways to automate your ecommerce business

Selling online is a lot of work. From marketing and communication to... read more

What on earth is Prompt Engineering ?

Will AI take our jobs ?

How to pivot and sell automation services

How to automate you workflows and save time

How automation will change business is 2023